MESSAGE covers a large number of electricity generation options utilizing a wide range of primary energy sources. For fossil-based electricity generation technologies, typically a number of different technologies with different efficiencies, environmental characteristics and costs is represented. For example, in the case of coal, MESSAGE distinguishes subcritical and supercritical pulverized coal (PC) power plants where the subcritical variant is available with and without flue gas desulpherization/denox and one internal gasification combined cycle (IGCC) power plant. The superciritical PC and IGCC plants are also available with carbon capture and storage (CCS) which also can be retrofitted to some of the existing PC power plants. Table 1 below shows the different power plant types represented in MESSAGE.

Four different nuclear power plant types are represented in MESSAGE-GLOBIOM, i.e. two light water reactor types, a fast breeder reactor and a high temperature reactor, but only the two light water types are included in the majority of scenarios being developed with MESSAGE in the recent past. In addition, MESSAGE includes a representation of the nuclear fuel cycle, including reprocessing and the plutonium fuel cycle, and keeps track of the amounts of nuclear waste being produced.

Most thermal power plants offer the option of coupled heat production (CHP, see Table 1). This option is modeled as a passout turbine via a penalty on the electricity generation efficiency. In addition to the main electricity generation technologies described in this section, also the co-generation of electricity in conversion technologies primarily devoted to producing non-electric energy carriers (e.g., synthetic liquid fuels) is included in MESSAGE (see sections on Liquid fuels of MESSAGE-GLOBIOM and Gaesous fuels of MESSAGE-GLOBIOM).

Technological change in MESSAGE is generally treated exogenously, although pioneering work on the endogenization of technological change in energy-engineering type models has been done with MESSAGE (Messner, 1997 1). The current cost and performance parameters, including conversion efficiencies and emission coefficients is generally derived from the relevant engineering literature. For the future alternative cost and performance projections are usually developed to cover a relatively wide range of uncertainties that influences model results to a good extent. As an example, Figure 1 and Figure 2 below provide an overview of costs ranges for a set of key energy conversion technologies (Fricko et al., 2016 2). 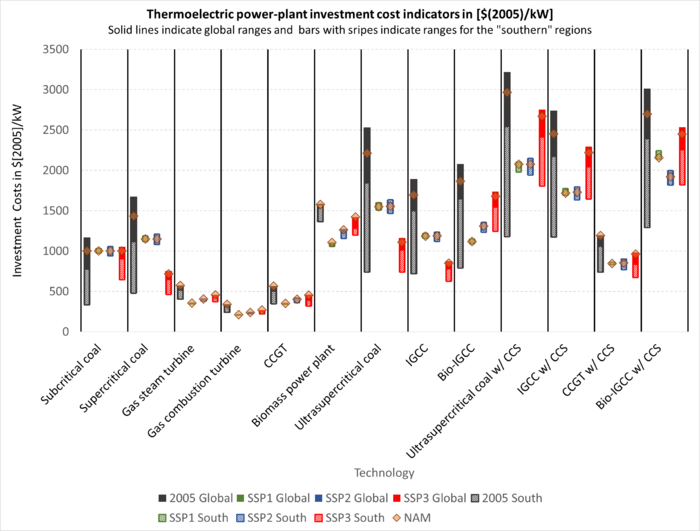 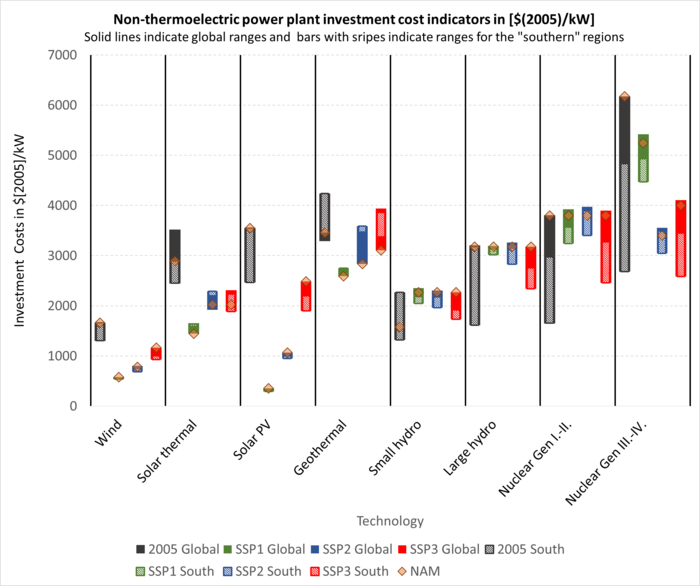