A key factor in future energy supply is the availability (and depletion) of various resources. One aspect is that energy resources are unevenly spread across world regions and often, poorly matched with regional energy demand. This is directly related to energy security. In representation of energy supply, the IMAGE energy model, describes long-term dynamics based on the interplay between resource depletion (upward pressure on prices) and technology development (downward pressure on prices). In the model, technology development is introduced in the form of learning curves for most fuels and renewable options. Costs decrease endogenously as a function of the cumulative energy capacity, and in some cases, assumptions are made about exogenous technology change.

It is assumed that all demand is always met. Because regions are usually unable to meet all of their own demand, energy carriers, such as coal, oil and gas, are widely traded. The impact of depletion and technology development lead to changes in primary fuel prices, which influence investment decisions in the end-use and energy-conversion modules Linkages to other parts of IMAGE framework include available land for bioenergy production, emissions of greenhouse gases and air pollutants (partly related to supply), and the use of land for bioenergy production (land use for other energy forms are not taken into account). Several key assumptions determine the long-term behaviour of the various energy supply submodules and are mostly related to technology development and resource base. An overview of the general energy supply model structure is provided in Figure 1. 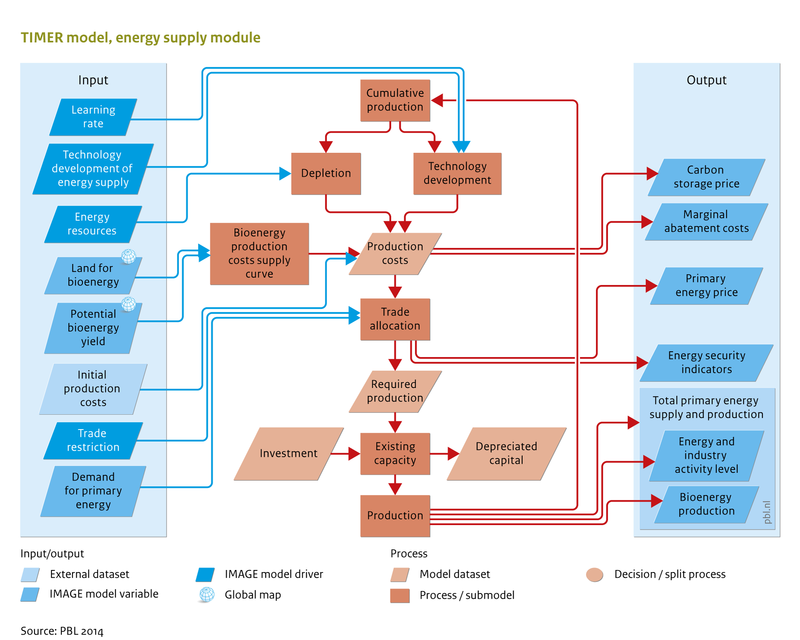 Depletion of fossil fuels (coal, oil and natural gas) and uranium is simulated on the assumption that resources can be represented by a long-term supply cost curve, consisting of different resource categories with increasing cost levels. The model assumes that the cheapest deposits will be exploited first taking into account trade costs between regions. For each region, there are 12 resource categories for oil, gas and nuclear fuels, and 14 categories for coal. A key input for each of the fossil fuel and uranium supply submodules is fuel demand (fuel used in final energy and conversion processes). Additional input includes conversion losses in refining, liquefaction, conversion, and energy use in the energy system. These submodules indicate how demand can be met by supply in a region and other regions through interregional trade.

Fossil fuel resources are aggregated to five resource categories for each fuel (see table above). Each category has typical production costs. The resource estimates for oil and natural gas imply that for conventional resources supply is limited to only two to eight times the 1970--2005 production level. Production estimates for unconventional resources are much larger, albeit very speculative. Recently, some of the occurrences of these unconventional resources have become competitive such as shale gas and tar sands. For coal, even current reserves amount to almost ten times the production level of the last three decades. For all fuels, the model assumes that, if prices increase, or if there is further technology development, the energy could be produced in the higher cost resource categories. The values presented in the table above represent medium estimates in the model, which can also use higher or lower estimates in the scenarios. The final production costs in each region are determined by the combined effect of resource depletion and learning-by-doing.

Supply of biomass and bioenergy is based on the availability of two resources: Energy crops, and residues. Thier supply is determined as follows:

The model describes the conversion of biomass (energy crops and residues) to two generic secondary fuel types: bio-solid fuels used in the industry and power sectors; and liquid fuel used in the transport, residential, and chemical sectors1. The trade and allocation of biofuel production to regions is determined by optimisation. An optimal mix of bio-solid and bio-liquid fuel supply across regions is calculated, using the prices of the previous time step to calculate the demand. The production costs for bioenergy are represented by the costs of feedstock and conversion. Feedstock costs increase with actual production as a result of depletion, while conversion costs decrease with cumulative production as a result of learning by doing. Feedstock costs include the costs of land, labour and capital, while conversion costs include capital, O&M and energy use in this process. For both steps, the associated greenhouse gas emissions (related to deforestation, N2O from fertilisers, energy) are estimated4, and are subject to carbon tax, where relevant.