The scope of GEM-E3 is general in two terms: it includes all simultaneously interrelated markets and represents the system at the appropriate level with respect to geography, the sub-system (energy, environment, economy) and the dynamic mechanisms of agent’s behaviour.

The model is not limited to comparative static evaluation of policies. The model is dynamic in the sense that projections change over time. Its properties are mainly manifested through stock/flow relationships, technical progress, capital accumulation and agents’ (myopic) expectations.

The design of GEM-E3 model has been developed following four main guidelines:

• Model design around a basic general equilibrium core in a modular way so that different modelling options, market regimes and closure rules are supported by the same model specification

• Fully flexible (endogenous) coefficients in production and in consumer’s demand

• Dynamic mechanisms, through the accumulation of capital stock.

The GEM-E3 model starts from the same basic structure as the standard World Bank models. Following the tradition of these models, GEM-E3 is built on the basis of a Social Accounting Matrix (SAM). The model is calibrated to a base year data set that comprises a full SAM for each country/region represented in the model. Bilateral trade flows are also calibrated for each sector represented in the model, taking into account trade margins and transport costs. Consumption and investment is built around transition matrices linking consumption by purpose to demand for goods and investment by origin to investment by destination. The initial starting point of the model therefore, includes a very detailed treatment of taxation and trade. 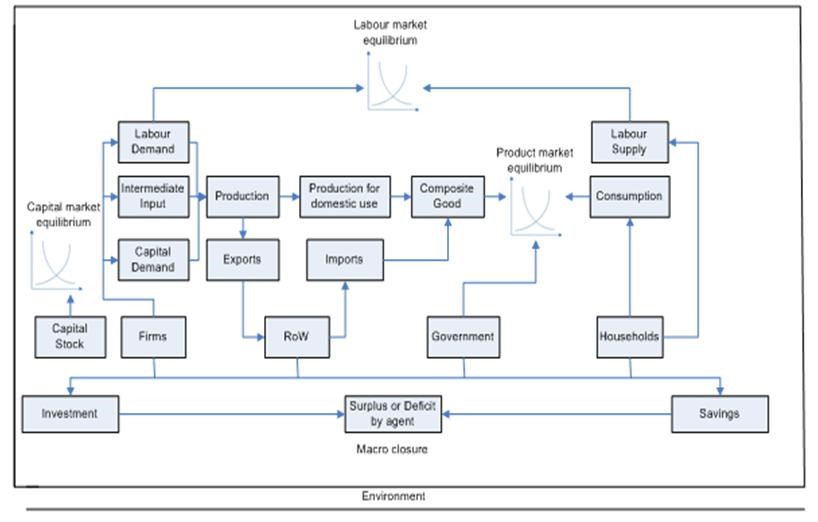 The GEM-E3 model is built in a modular way around its central CGE core. It supports defining several alternative regimes and closure rules without having to re-specify or re-calibrate the model. The most important of these options are presented below:

• Capital mobility across sectors and/or countries

• Flexible or fixed current account (with respect to the foreign sector)

The “counterfactual” equilibria can be computed by running the model under assumptions that diverge from those of the reference scenario. This corresponds to scenario building. In this case, a scenario is defined as a set of changes of exogenous variables, for example a change in the tax rates. Changes of institutional regimes, that are expected to occur in the future, may be reflected by changing values of the appropriate elasticities and other model parameters that allow structural shifts (e.g. market regime). These changes are imposed on top of the assumptions of the reference scenario thereby modifying it.

A counterfactual simulation is characterized by its impact on consumer’s welfare or through the equivalent variation of his welfare function. The approach adopted in most of the applied general equilibrium models regards the use of the monetary utility function, which measures the nominal income that the consumer needs for a given price vector in order to be at the same welfare level with a different income level and a price vector. With this measure it is possible to quantify the effects on welfare of alternative policy scenarios. This measure shows the income that should be given to/taken off the consumer so as to be found at the same welfare level found with the reference scenario prices. A positive value of this measure means a positive change in consumer welfare. The equivalent variation can be, under reasonable assumptions, directly mapped to some of the endogenous variables of the model such as consumption, employment and price levels.

The most important results, provided by GEM-E3, are as follows:

• Dynamic annual projections in volume, value and deflators of national accounts by country

• Consumption matrix by product and investment matrix by ownership branch

The model is formulated as a simultaneous system of equations with an equal number of variables. The system is solved for each year following a time-forward path. The model uses the GAMS software and is written as a mixed non-linear complementarity problem solved by using the PATH algorithm using the standard solver options.

The model is modularly built allowing the user to select among a number of alternative closure options and market institutional regimes depending on the issue under study.

The GEM-E3 model is the result of a collaborative effort by the National Technical University of Athens (NTUA/E3M-Lab, leading partner), Katholieke Universiteit of Leuven (KUL), University of Manheim and the centre for European Economic Research (ZEW), Ecole Centrale de Paris (ERASME) as the core modelling team. NTUA/E3M-Lab have maintained and further developed the GEM-E3 model in various aspects including the introduction of market imperfections, the construction of GEM-E3 world version, bottom-up representation of power generation technologies, equilibrium unemployment, a complete coverage of all GHG, and the introduction of semi-endogenous growth features.

Applications of the model have been carried out for several Directorate Generals of the European Commission (economic affairs, competition, environment, taxation, research) and for national authorities. GEM-E3 is used regularly to provide analytical support to European Commission services, particularly with regards to the economics of climate change.