The uncertainty surrounding the evolution of oil and gas resources and reserves is one of the most crucial drivers of the world energy system. Conventional and non-conventional oil are distinguished in PROMETHEUS analysis. The former are differentiated between Gulf and non-Gulf oil, while the latter are distinguished between Venezuela’s extra heavy oil, Canada’s tar sands and light tight oil. The uncertainty that surrounds the amount of oil and natural gas that is yet to be discovered has been incorporated into PROMETHEUS. Using studies conducted by USGS, comprehensive analysis has been carried out in order to obtain robust estimates for the yet to be discovered oil and gas conventional resources (endowments) at the starting year of the simulation procedure.

The rate of discovery as well as the rate of recovery of petroleum are endogenous in the model, they are both positively correlated with the international oil price and are subject to their own specific uncertainties. Gross additions to reserves of conventional oil are a function of the yet to be discovered oil in each region, the international oil price and world oil production, while the recovery rates of unconventional oil sources are pricedependent and act as a “backstop” preventing the persistence of very high oil prices. Gross additions to conventional gas reserves are a function of the yet to be discovered natural gas and the gross additions to oil reserves, as the exploration for conventional oil increases the likelihood of gas discoveries. In addition to conventional gas, unconventional gas (shale, tight and coal bed methane) is considered in the PROMETHEUS model, the resource base of which and the uncertainty surrounding it, is derived from a variety of assessments.

Oil and gas reserves are supplemented by reserve growth arising from known deposits following assessments by USGS. Apart from statistical dependence arising from geological factors, exploration and extraction technologies, hydrocarbon reserves are also linked through their dependence on the relevant prices which are incorporated in the equations. Oil production in the Gulf is influenced by the (lagged) reserves to production ratio in the Middle East and the world oil demand, while oil production capacity in the Middle East is driven by petroleum demand but it is also subject to random disruptions, whose variance is determined using historical data. Conventional oil production in the Rest of the world is driven by the world demand, the international oil price and reserves of this region.

Non-conventional oil production is driven by world oil demand, the international oil price and the R/P (reserves to production) ratio of conventional oil. When the international oil price exceeds a threshold, the production from non-conventional oil sources increases substantially, as more and more non-conventional deposits become economically recoverable. Besides the statistical dependence due to geological factors and due to hydrocarbon exploration and extraction technologies, fossil fuel reserves are also correlated through the statistical dependence of their prices. International fossil fuel prices (for oil, natural gas and coal) are endogenous in PROMETHEUS; this is a distinctive feature of the model, as energy price development is a crucial factor determining the future evolution of the global energy system. On the other hand, global hydrocarbon prices are exogenous in several energy-economy models. The deterministic version of PROMETHEUS has been extensively used by the European Commission (e.g. EU Reference scenario 2016, Energy trends to 2050, EU Energy Roadmap 2050) to provide aquantitative assessment for fuel import prices in EU under alternative scenario assumptions.

Import gas prices in each region depend on the evolution of international gas price and the cost of gas extraction and transport from the most important producing regions (mark-up cost). The importance of Reserve to Productio ratios in the oil and gas price equations is a clear reflection of the oligopolistic nature of themarkets for the respective fuels. At any rate, the equations have been estimated econometrically over periods when cartel power has been much in evidence and rents and other oligopolistic mark-ups are captured in all equation parameters including constants. The latter can be varied in order to reflect different formulations of the fossil fuel market and especially different structures in the gas market ranging from oil price indexing with long-term contracts (as in Japan) to gas-to-gas competition (in the USA) and their combinations (as in the EU and other emerging markets).

The international price of coal is driven by the coal demand and supply dynamics at the regional and global levels and is also partly linked to the international oil price, as it is usually observed in international markets mainly due to oil price indexing and coal transportation costs influenced by global oil price. 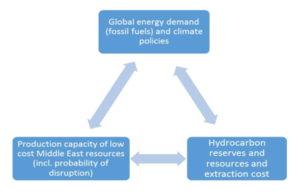