The different Shared Socioeconomic Pathways (SSPs) have varying impacts on air pollution emissions. SSP1 and SSP5 show the most rapid emissions reductions than the other SSPs due to more effective pollution control and lower intensity for fossil fuels. SSP3 shows a consistent decline throughout the century, which is however less sharp than the reduction presented by SSP1 and SSP5. SSP3, due to larger projected population growth and relatively more slow and heterogeneous economic growth, results in an increase in emissions until 2030, and through a slight post-2030 decline end in only slightly lower emissions levels than the current ones by 2100.

Mitigation scenarios bring co-benefits in terms of air pollutant emission reductions. The largest emissions reductions can be seen for the SSP3 scenario, which has the highest baseline emissions, and the lowest for SSP1/SSP5. In terms of pollutants, SO2 and NOx emissions result in the largest reductions, whereas BC emissions do not decline as much - this can mainly be attributed to assumptions on fuel-substitution in the residential sector. (Rao et al, 20161)

Figure 1 presents the differences of emissions reductions between the different SSPs for both a reference case as well as for mitigation scenarios. 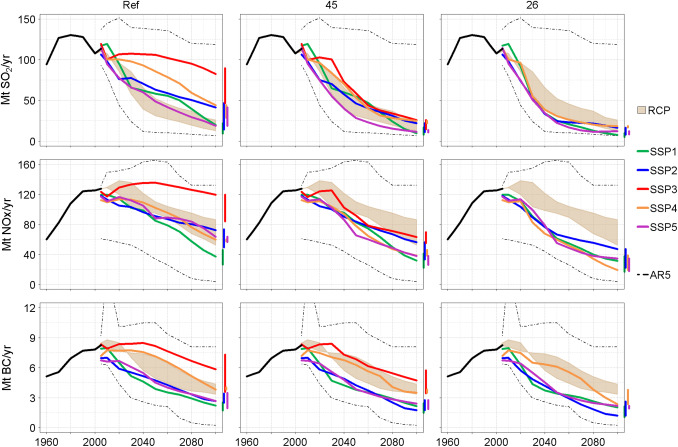 Figure 1: Emissions of SO2, NOX and BC in SSP marker baselines (Ref) and 4.5 (labeled as 45) and 2.6 (labeled as 26) W/m2 climate mitigation cases. Shaded area indicates range of total emissions from RCP scenario range from (van Vuuren et al., 2011a). Assessment Report (AR5) range refers to the full range of scenarios reviewed in the Fifth Assessment Report (AR5) of Working Group III of the Intergovernmental Panel on Climate Change (IPCC); Historical values are derived from (Lamarque et al., 2010); Colored bars indicate the range of all models (markers and non-markers) in 2100. (Rao et al, 2016)
1 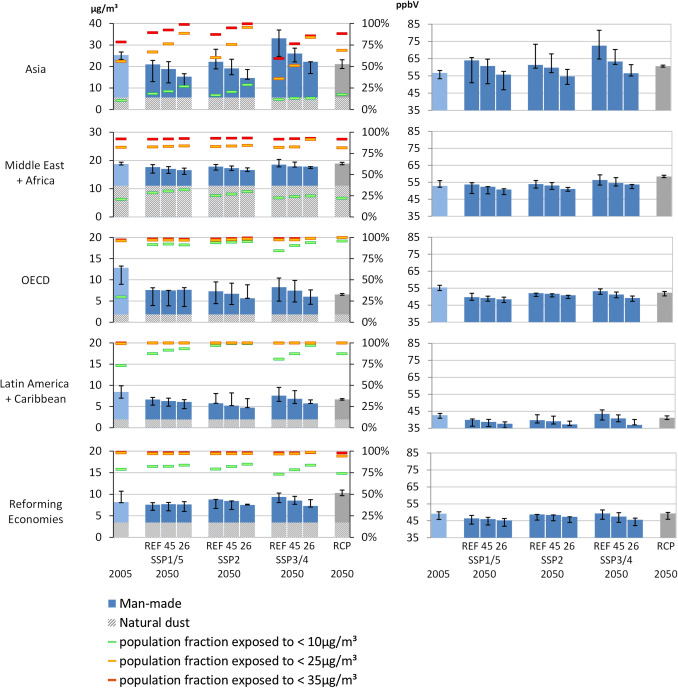 Figure 2: Left panel: region-population weighted mean PM2.5 in μg/m3 (left axis) from marker scenario (blue color bars) and average from the 3 RCP scenarios (grey bar), contribution of natural PM2.5 (hatched area) for the year 2005 (leftmost bar) and 2050. Green, orange and red colored markers indicate the fraction of the population exposed to <10, <25 and <35 μg/m3 respectively (right axis). Right panel: mean ozone concentration (maximal 6-monthly mean of daily maximum ozone). For the grouped scenarios SSP1/5 and SSP3/4 the concentration represents the mean of the respective marker scenarios. Error bars show the concentration range (min/max) of regional averages from all models in the (set of) SSP scenarios shown, including non-marker. For the RCP bars, the error bar indicates the min/max range within the set of 3 RCP2.6, RCP4.5 and RCP8.5 scenarios. (Rao et al, 2016)
1