As shown above, each type of power generation technology has is classified according to level of energy efficiencies and facilities costs are differentiated corresponding to the level of efficiency. The different levels of generation efficiencies are assumed in order to represent the broader ranges in current generation efficiency levels in different countries (see Oda et al. 2012). Their technological progresses are assumed exogenously. Table 3 shows the assumptions on capital costs and the efficiency of electricity generation. Fossil fuel prices are endogenously determined within the model by using the relationship between the cumulative production of fossil fuels and production costs. However, the fossil fuel prices will be dominated not only by production prices, but also by speculation, etc. Therefore, the baseline fossil fuel prices are calibrated to meet the prices of the reference scenarios of the IEA WEO 2010 (IEA 2010b) over the assessment time periods, while the prices in the mitigation scenarios are endogenously determined by the cumulative amounts of production induced by levels of emission reductions or the MAC. DNE21+ also tracks investments by vintage capital stock. 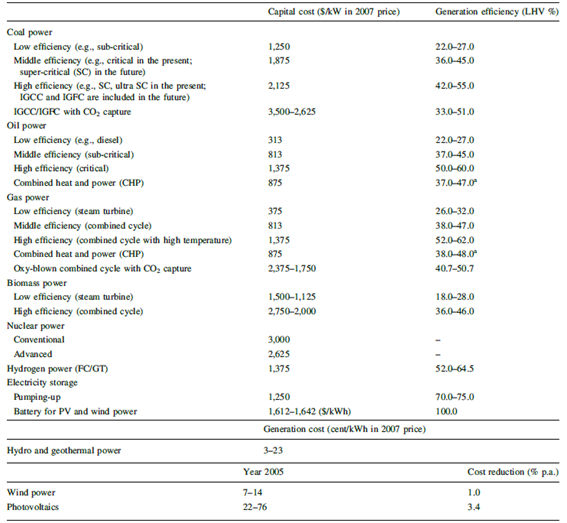 Electricity demand is modeled in a way that demand-supply is balanced. The demand is expressed by the load duration curves, representing four time periods, instantaneous peak, peak, intermediate, and off peak time periods, in accordance with the level of electricity demand. This enables appropriate evaluation of electricity system corresponding to the characteristics of individual power generation technologies such as the base power load power plants and the peak load power plants.