Emissions of greenhouse gases and air pollutants are major contributors to environmental impacts, such as climate change, acidification, eutrophication, urban air pollution and water pollution. These emissions stem from anthropogenic and natural sources. Anthropogenic sources include energy production and consumption, industrial processes, agriculture and land-use change, while natural sources include wetlands, oceans and unmanaged land. Better understanding the drivers of these emissions and the impact of abatement measures is needed in developing policy interventions to reduce long-term environmental impacts. On this page the general approaches to projecting emissions in the IMAGE framework are described for modelling greenhouse gases (CH4, N2O), ozone precursors (NOX, CO, NMVOC), acidifying compounds (SO2, NH3) and aerosols (SO2, NO3, BC, OC). The methods used for modelling both GHGs emissions, pollutants, and non-GHG forcing agents are very similar and therefore described together. On the GHGs page the modelling of emission abatement is described.

An overview of the emissions model structure is provided in Figure 1. 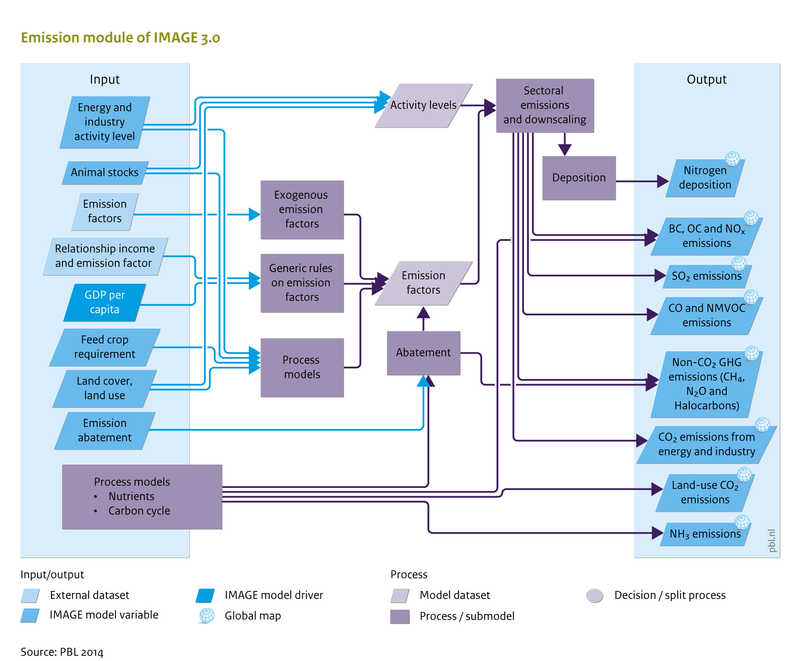 Air pollution and GHG emission sources included in IMAGE are listed in Table 1. In approach and spatial detail, gaseous emissions are represented in IMAGE in four ways:

The simplest way to estimate emissions in IMAGE is to use global estimates from the literature. This approach is used for natural sources that cannot be modelled explicitly.

Past and future developments in anthropogenic emissions are estimated on the basis of projected changes in activity and emissions per unit of activity. The equation for this emission factor approach is:

The emission factors are time-dependent, representing changes in technology and air pollution control and climate mitigation policies. The emission factor is used to calculate energy and industry emissions, and agriculture, waste and land-use related emissions. Following the equation, there is a direct relationship between level of economic activity and emission level. Shifts in economic activity (e.g., use of natural gas instead of coal) may influence total emissions. Finally, emissions can change as a result of changes in emission factors (EF) and climate policy (AF).

GEF is a special case of the EF method, where the activity is grid-specific, resulting in grid-specific emissions. This is done for a number of sources, such as emissions from livestock.

Land-use related emissions of NH3, N2O and NO are calculated with grid-specific models. The models included in IMAGE are simple regression models that generate an emission factor. For comparison with other models, IMAGE also includes the N2O methodology generally proposed by IPCC 1.

Activity describes the activity level to which the emission factor is applies, or, if only GM method occurs, the main determinant for the gridded model.

a GM for dairy and non-dairy cattle, EF for other animal categories.

Emissions from energy production and use

Emission factors are used for estimating emissions from the energy-related sources. In general, the Tier 1 approach from IPCC guidelines 1 is used. In the energy system, emissions are calculated by multiplying energy use fluxes by time-dependent emission factors. Changes in emission factors represent, for example, technology improvements and end-of-pipe control techniques, fuel emission standards for transport, and clean-coal technologies in industry.

Future emission factors are based on the following rules:

For the industry sector, the energy model includes three categories:

CO2 exchanges between terrestrial ecosystems and the atmosphere computed by the LPJ model are described in Carbon cycle and natural vegetation. The land-use emissions model focuses on emissions of other compounds, including greenhouse gases (CH4, N2O), ozone precursors (NOX, CO, NMVOC), acidifying compounds (SO2, NH3) and aerosols (SO2, NO3, BC, OC).

There are some other exceptions: Various land-use related gaseous nitrogen emissions are modelled in grid-specific models (see further), and in several other cases, emission factors depend on the assumptions described in other parts of IMAGE. For example, enteric fermentation CH4 emissions from non-dairy and dairy cattle are calculated on the basis of energy requirement and feed type. High-quality feed, such as concentrates from feed crops, have a lower CH4 emission factor than feed with a lower protein level and a higher content of components of lower digestibility. This implies that when feed conversion ratios change, the level of CH4 emissions will automatically change. Pigs, and sheep and goats have IPCC 2006 1 emission factors, which depend on the level of development of the countries. In IMAGE, agricultural productivity is used as a proxy for the development. For sheep and goats, the level of development is taken from EDGAR.