The availability and costs of fossil fuels influences the future direction of the energy system, and therewith future mitigation challenges. Understanding the variations in fossil fuel availability and the underlying extraction cost assumptions across the SSPs is hence important. Our fossil energy resource assumptions are derived from various sources, including global databases such as The Federal Institute for Geosciences and Natural Resources (BGR) and the U.S. Geological Survey (USGS), as well as market reports and outlooks provided by different energy institutes and agencies. The availability of fossil energy resources in different regions under different socio-economic assumptions are then aligned with the storylines of the individual SSPs (Rogner, 1997 1; Riahi et al., 2012 2). While the physical resource base is identical across the SSPs, considerable differences are assumed regarding the technical and economic availability of overall resources, for example, of unconventional oil and gas.

What ultimately determines the attractiveness of a particular type of resource is not just the cost at which it can be brought to the surface, but the cost at which it can be used to provide energy services. Assumptions about fossil energy resources should thus be considered together with those of related conversion technologies. In line with the narratives, technological change in fossil fuel extraction and conversion technologies is assumed to be slowest in SSP1, while comparatively faster technological change occurs in SSP3 thereby considerably enlarging the economic potential of coal and unconventional hydrocarbons ( Table 1, Figure 1). However, driven by the tendency toward regional fragmentation, the focus in SSP3 is assumed to be on developing coal technologies which leads to a replacement of oil products by synthetic fuels in the longer-term based on coal-to-liquids technology. In contrast, for SSP2 we assume a continuation of recent trends, focusing more on developing extraction technologies for unconventional hydrocarbon resources, thereby leading to higher potential cumulative oil extraction than in the other SSPs (Figure 1, middle panel).

Table 1 shows the assumed total quantities of fossil fuel resources in the MESSAGE model for the base year 2005. Figure 1 gives these resource estimates as supply curves. In addition, the assumptions are compared with estimates from the Global Energy Assessment (Rogner et al., 2012 3) and the databases mentioned earlier. Estimating fossil fuel reserves is built on both economic and technological assumptions. With an improvement in technology or a change in purchasing power, the amount that may be considered a “reserve” vs. a “resource” (generically referred to here as resources) can actually vary quite widely.

‘Reserves’ are generally defined as being those quantities for which geological and engineering information indicate with reasonable certainty that they can be recovered in the future from known reservoirs under existing economic and operating conditions. ‘Resources’ are detected quantities that cannot be profitably recovered with current technology, but might be recoverable in the future, as well as those quantities that are geologically possible, but yet to be found. The remainder are ‘Undiscovered resources’ and, by definition, one can only speculate on their existence. Definitions are based on Rogner et al. (2012) 3.

The following table (Table 2) presents the fossil resource availability in ZJ (2010-2100) for coal, oil and gas, for SSP1, SSP2 and SSP3, respectively.

Figure 1 presents the cumulative global resource supply curves for coal, oil and gas in the IIASA IAM framework. Green shaded resources are technically and economically extractable in all SSPs, purple shaded resources are additionally available in SSP1 and SSP2 and blue shaded resources are additionally available in SSP2. Coloured vertical lines represent the cumulative use of each resource between 2010 and 2100 in the SSP baselines (see top panel for colour coding), and are thus the result of the combined effect of the assumptions on fossil resource availability and conversion technologies in the SSP baselines. 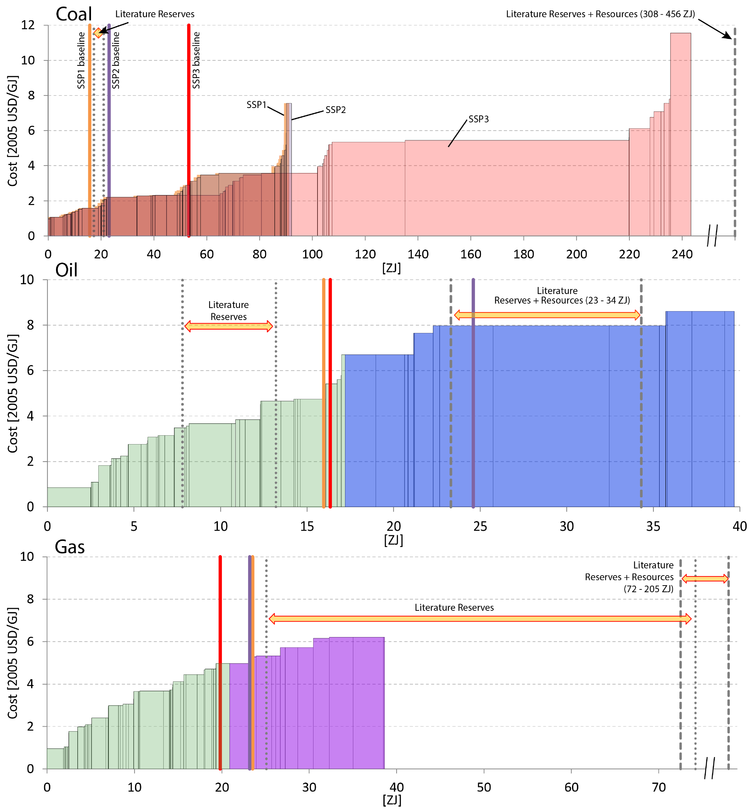 Conventional oil and gas are distributed unevenly throughout the world, with only a few regions dominating the reserves. Nearly half of the reserves of conventional oil is found in Middle East and North Africa, and close to 40% of conventional gas is found in Russia and the former Soviet Union states. The situation is somewhat different for unconventional oil of which North and Latin America potentially possess significantly higher global shares. Unconventional gas in turn is distributed quite well throughout the world, with North America holding most (roughly 25% of global resources). The distribution of coal reserves shows the highest geographical diversity which in the more fragmented SSP3 world contributes to increased overall reliance on this resource. Russia and the former Soviet Union states, Pacific OECD, North America, and Centrally Planned Asia and China all possess more than 10 ZJ of reserves.