The description of alternative liquid fuel production in the model is crucial for the assessment of future energy supplies, in particular if global climate change mitigation policies are implemented or if oil markets become more volatile due to for example increasing depletion of oil supplies. The supply of liquid fuel is important for road and air transport, which are today mainly powered by internal combustion engines using oil-based liquid fuels. There are two major possibilities for technical change in this sector: the use of liquid fuels from sources other than oil - which is the subject of this section - and the use of other types of engines and transportation modes.

In the current version of Imaclim-R, biofuels (ethanol and biodiesel) and synthetic fuels produced from the liquefaction of coal (hereafter referred to as CTL for Coal to Liquids) are the main alternatives available to refined oil over the course of the 21st century. In the dynamic module of the model which governs alternative fuel supply on liquid fuel markets, these fuels are considered to be perfect substitutes for refined oil. In the reference year, production consists solely of refined crude oil, and over the course of modeled scenarios alternative fuels are produced as soon as they become profitable.

First and second generation biofuels are the first large-scale substitutes to oil for liquid fuel production that are discussed here. The IEA (2014) describes/defines biofuels as ?transportation fuels derived from biological sources". They can come in liquid (ethanol or biodiesel) or gaseous (biogas or hydrogen) form. Biofuels can be produced from crop sources (either food crops or non-food crops, e.g. switchgrass) and non-crop sources (e.g. forestry residues, industrial waste) (IEA, 2004). The current version of IMACLIM-R models the supply of ethanol and biodiesel.

There are currently three main feedstock types for ethanol production: (i) sugar cane or sugar beet, (ii) grains such as wheat or corn, and (iii) lignocellulosic materials such as wood and straw from agriculture and forest residues. Ethanol is typically used as a substitute for petrol. Biodiesel, for instance produced from oilseed crops can be used as a substitute for petroleum diesel and has similar physical properties to conventional diesel (Bozbas, 2005). In IMACLIM-R, ethanol and biodiesel are assumed to be directly usable in internal combustion engines (i.e. no engine modification is necessary), by mixing with oil-based fuels (petrol and diesel, respectively) according to set proportions.

The penetration of biofuels in liquid fuel markets depends on their availability and their competitiveness with oil-based fuels and other alternatives. Most importantly, the supply of biofuels is subject to global upstream constraints related to the availability of land. The IMACLIM-R framework aims at eventually being coupled with a land-use module (see wiki page on Land-Use) that will specify the evolution of land rents from; competition for land uses and; the production choices made by farmers. In the current version of the model this is replaced by supply curves for ethanol and biodiesel. Using these supply curves the constraint on the availability of agricultural land is thus captured by a threshold value on biofuels production. These supply curves are calibrated on the results of sectorial modelling to 2100 (IEA, 2006a), which were interpolated to obtain an annual continuum of worldwide supply curves between 2001 and 2100. The supply curves define the maximum amount of biofuels that can penetrate the liquid fuel market at a given date and for a given price (including taxes) of oil refined products. This captures in a simplistic manner the competition between biofuels and oil-based liquid fuels: all else being equal, high oil prices allow biofuels to compete with oil-based fuels. The price of refined crude oil can include a tax on the CO2 emissions from oil in the case that climate change mitigation policies are put into place. Biofuel supply curves include explicit limits on its production related to land availability and competition with other uses of biomass.

The supply curves evolve over time to account for technical improvements in production processes: the production potential of various biofuels increases and their production costs decrease through technical change. Two alternatives can be considered for the calibration of the supply curve. A conservative alternative assumes that in 2030 maximum global biofuel production is at 14 EJ/year, increasing to 42 EJ/year in 2050 from technical progress. These assumptions are quite conservative with respect to recent estimates about biofuels potential (Chum et al., 2011) and a more optimistic alternative is also introduced, assuming 20 EJ/year in 2030 and 60 EJ/year in 2050. The increase in the production potential is mainly due to the medium term maturing of second-generation technologies , i.e. the use of cellulosic lignite to produce ethanol and biomass liquefaction for biodiesel production. Second generation technologies may modify the location of biofuel production considerably if large scale production potential at reasonable cost becomes available in temperate climates. Up until now large-scale production of ethanol has been traditionally found in tropical regions with high crop yields. The case of Brazilian sugar cane is a prime example.

An exogenous constraint that covers other kinds of inertias that could affect the deployment of these technologies is imposed on the annual growth in biofuel production. In modelling terms, this constraint is represented by a time delay, ?tbio, which captures the inertia of the production of raw biomass and the deployment of refining capacity. These constraints and their feedback on the cost of biofuels are one major reason why synthetic fuels like Coal-to-Liquids may become another competitive alternative to oil.

Global production of biofuels is distributed across the regions of the model according to two specific distribution keys: the price formation and cost structure. The evolution of the share of biofuels in the liquid fuel market shapes the global cost structure of the ?alternatives to oil? sector via a new weighting of the cost structures of all alternative fuels. The cost structures of the two main types of biofuels, ethanol and biodiesel, are built on the basis of their selling price, which is set equal to the price of refined oil. For this it is assumed that the income from biofuel sales is allocated to the consumption of intermediary goods from the agricultural sector. This means that the cost structure of biofuel refining is neglected but this will be better represented in a future version of the model. Nevertheless, the model accounts for the income transfers to the agricultural sector from the production of biofuels, the use of agricultural production capacities to produce biofuels and the use of energy to produce crops for biofuel production via the consumption of agricultural goods.

The land-use dynamic module will be crucial to deliver insights about the competition between food and biofuels.

The second alternative to oil-based fuels is Coal-To-Liquid (CTL). Coal is mainly used for electricity generation but can also be converted into liquid fuels. Carbon-to-liquid technologies include the gasification of coal combined with Fischer-Tropsch synthesis (this process is also called indirect coal liquefaction), and the direct liquefaction of coal which involve dissolution of the coal in a solvent at elevated temperature and pressure and catalysed hydrocracking, (IEA, 2006b). According to the IEA, converting coal to liquid fuels emits seven to ten times more CO2 than crude oil refining. However, with carbon capture and storage, emissions from coal liquefaction would be similar to those from crude refining, (IEA, 2006b). The low price and wide availability of coal (although it is a finite resource too) are the main drivers for the development of coal-to-liquids technology, (IEA, 2006b).

We assume CTL is an inexhaustible ?backstop? technology subject to capacity deployment constraints. In line with Amigues et al. (1998), the production of inexhaustible substitutes starts before all least-cost deposits of the exhaustible resource are exploited. The development of coal liquefaction depends on its profitability compared to traditional oil-based fuels. CTL enters the market as soon as the liquid fuel selling price exceeds the total cost of CTL, pCTL, including production processes and risk premium. This threshold value pCTL is set at 100 US$/barrel. Once this threshold is reached, CTL producers are willing to take the risk of launching large-scale production and fill the gap between total liquid fuel demand, D(t), and total supply from other sources (refined oil and biofuels), S(t). CTL producers are willing to fill a growing fraction of the gap between total fuel demand and the supply of refined oil and biofuels.

High cumulative oil prices give confidence in CTL profitability and increase the level of desired CTL production (see f(t) in figure below). The share s(t) of the potential market for CTL (D(t) - S(t)) that is actually available to be filled by CTL production is thus an increasing function of cumulative prices. Cumulative investment on CTL over time is also a function of past oil prices. 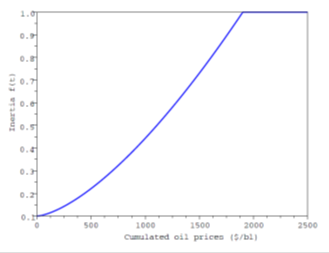 Investors' beliefs in profitability of investments in CTL production capacity

Finally, constraints on the delays of maturation of investments in production capacity and on the time necessary to adapt distribution networks are captured by a constraint on CTL production growth:

Where is the largest possible increase in CTL production. This is calculated as a linear interpolation between values for 2030, 2035 and 2050 from IEA scenarios (2008).

The technological features of coal liquefaction are drawn from the Energy Technology Perspectives study (IEA, 2006c). The cost structure for CTL production includes a technical coefficient for the unitary consumption of coal corresponding to a 50% energy efficiency of the liquefaction process and a profit rate which is set to obtain a total production cost of CTL equal to 100 US$/barrel (i.e. the threshold price). This level of profit reflects the highly capitalistic character of coal liquefaction technologies.

In the current version of IMACLIM, the production of synthetic fuels from hydrocarbons is limited to the liquefaction of coal, mainly because of the abundance of coal resources. The liquefaction of gas and the extraction of shale gas are not modelled. These technology options all have low production rates and high CO2 process emissions. However, natural gas resources are assumed to be only used in the most efficient direct combustion processes and the extraction of shale gas is not envisaged due to its impact on the environment and its very low efficiency.