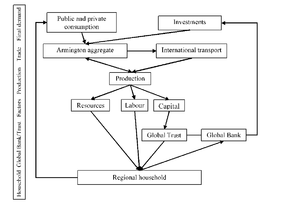 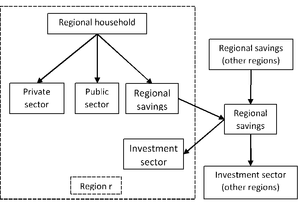 Figure 2. The Regional Household and the Global Bank. Source: based on Hertel (1997).

Figures 1 and 2 illustrate the circular flow of payments among the main components of the model, which explicitly depicts interactions between commodity and factor markets as well as interactions among regions. The Regional Household, which represents private households and government in each region, receives the payments from supplying primary factors. The income of the Regional Household is spent on private and public consumption, and savings.

The Global Bank collects savings from all regions and then provides investments to regions so that the expected return to capital equalises among regions. The Global Trust collects the earnings from installed capital and distributes them among regions, given the assumption of perfect capital mobility. Firms use primary factors and intermediates to produce goods and services. Domestic and imported commodities build the so-called Armington aggregate, which is then distributed among private and public consumption and investments.

Note: The documentation of GRACE is 'under review' and is not yet 'published'!
Retrieved from "https://www.iamcdocumentation.eu/index.php?title=Macro-economy_-_GRACE&oldid=15016"
Category: