International Futures (IFs) is a large-scale, long-term, integrated global modeling system. The system is dynamic recursive with 1-year time steps through 2100. IFs is a tool for thinking about long-term global trends and strategic planning for the future. Among the unique features of the system is the extensive integration of models across human capacity, social, and natural systems. IFs contains highly integrated (hard-linked) models across demographic, economic, education, health, governance, agriculture, energy, infrastructure, water, climate and other subsystems for 186 countries interacting in the global system. The central purpose of IFs is to facilitate exploration of global futures through alternative scenarios. IFs can help a user

IFs is integrated with a large database (more than 4,000 series) for its countries, most of which include data since 1960. The system is fully imbedded in an interactive interface, and it is both open source and freely available to users both on-line (www.ifs.du.edu) and in downloadable form. The interface facilitates data analysis, projection exploration and comparison, and flexible scenario analysis. The models of IFs and their interactions. Figure 1 shows the major hard-linked models within the IFs system. 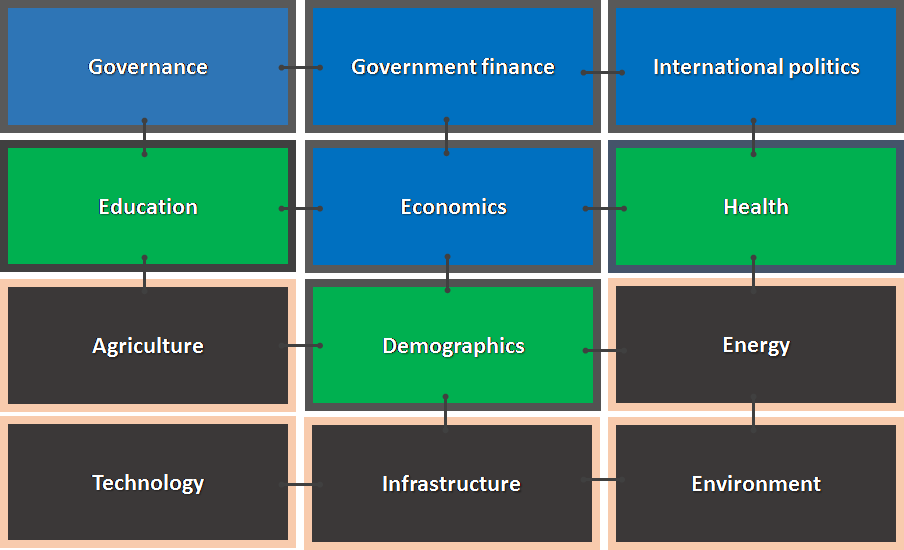 The basic issue clusters and models of the IFs system


The multisector economic model is general equilibrium, although the model uses changes in inventory stocks and relative prices to drive changes in supply and demand, chasing equilibrium over time rather than solving for it or iterating to it in every time cycle. This is consistent with actual market behavior and facilitates computational efficiency. The partial equilibrium physical agriculture model differentiates crop, meat and fish and generates calorie and protein availability. The partial equilibrium energy model differentiates coal, oil, natural gas, hydroelectric power, nuclear power, and renewable energy, tracking resources bases and production. Key variables from the agriculture and energy models, converted to monetary terms, override those of the same sectors in the economic model, while the integration across sectors in the economic model of variables including household, government and firm demand and savings/investment availability provide information to and constraints upon the physical models.

There are also water and infrastructure models. The water model represents supply from renewable and nonrenewable sources and demand for agricultural, municipal and industrial uses. Agricultural water use is linked to irrigation in the agriculture model and can constrain yields. The infrastructure model represents extent of and access to paved roads, safe water and sanitation, electricity, and information and communication technologies. It requires investment from public and private sectors that compete with demand from the education and health models, as well as other uses.

The physical agriculture and energy models determine land use and generate carbon emissions. A representation based on the MAGICC model, used widely in IAMs. connects carbon emissions to atmospheric levels, global warming, and country-level changes in temperature and precipitation. Those feed forward to the agriculture model with a mixture of potentially positive and negative consequences.

Across the broader IFs system, two aspects are especially important in the interaction of all of the separate models. The first is finance, including governmental revenues and expenditures, but also those of households and firms. The economic system is imbedded within a full social accounting matrix that represents all financial flows within and across these agent categories and assures that representation of those flows is appropriately balanced and constrained—there are thus no free lunches. The second area where systems are highly interactive is via the endogenous representation of productivity in the economic model. Multifactor productivity is responsive to changes in human capital (education and health), social capital (including governance quality), physical capital (including infrastructure development), and knowledge capital (including research and development spending but also the knowledge imbedded in trade among countries).

A broader model of governance represents the state of domestic security or instability, corruption, and inclusion (democracy) and connects to government finance. Socio-political variables also trace change in basic value/cultural structures, and portray various elements of formal and informal socio-economic structures and processes, including income distribution. The IFs system also represents changes in country power positions globally, a foundation of international politics and potentially of capability for collective global action.

Technological change is important across most of the models in IFs. While exogenously represented in many instances, the production functions in the economic, agriculture, and energy models have elements of learning by doing. This brief summary only touches on the model structure and interconnections; for more extensive coverage see Hughes (2019 forthcoming) and the IFs project Wiki (http://pardee.du.edu/wiki/Main_Page).

The interactive interface of IFs and analysis with the system. Because IFs is dynamic recursive and computationally efficient, scenario development and exploration with it can be interactive. The completion of a single run with the system requires less than 15 minutes on a fast laptop or the project’s own server, where it is available also for use by others. Figure 2 shows the main screen for interaction with the system. Leaving aside Extended Features (which the IFs Wiki also documents), there are three major functionalities in the main menu, each of which lead into a large number of sub-options: 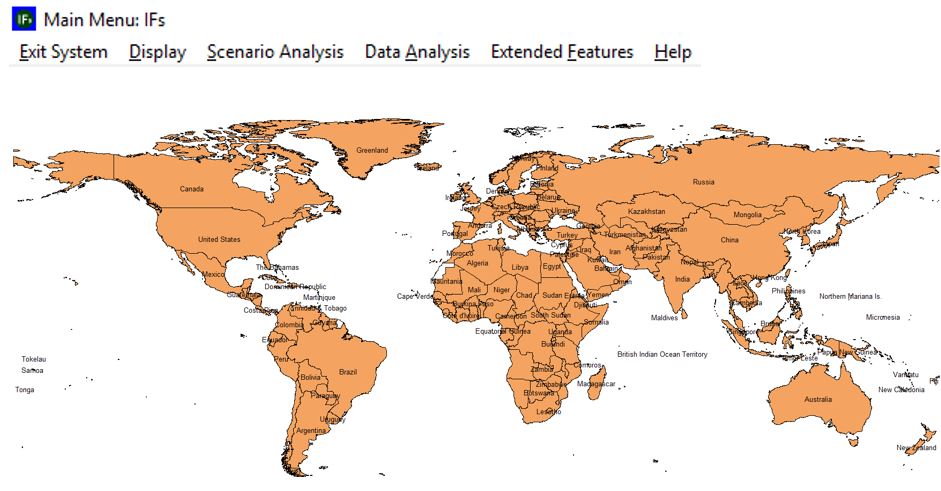 The main menu of the IFs interface with key functionalities
Retrieved from "https://www.iamcdocumentation.eu/index.php?title=Model_concept,_solver_and_details_-_IFs&oldid=8950"
Category: