The main building blocks of TIAM-UCL is a TIMES model which includes processes and commodities, which are connected by commodity flows in a network representation called a Reference Energy System (RES). The model dynamics are determined by the time horizon and resolution, the evolutionary development of supply and technologies, the growth of the demand for energy services, and policies (e.g., mitigation targets, renewable portfolio standards), complimented by various alternate scenarios. 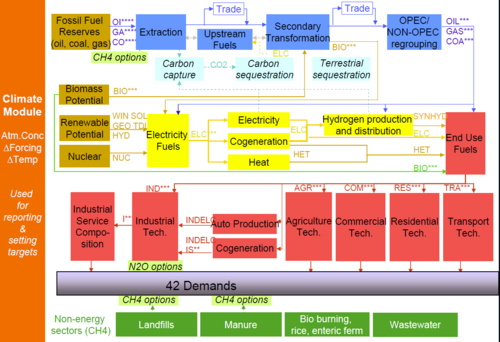 In each region, the TIAM-UCL model describes the entire energy system by all essential current and future energy technologies from the primary energy supply over the processing, conversion, transport, distribution of energy carriers to the end-use sectors and the useful energy demands. These demands are linked to exogenous underlying drivers, like population growth or GDP development, via demand elasticities. Each region can trade one or more resources (fossil fuels and biomass) with other regions. Regional trade will depend on demand, supply (resource availability) and cost (resource and transportation cost) of the resources.

Base-year energy-service demands are exogenous and projected over 2005-2100 using drivers such as GDP, population, household, sector output etc. The base year (2005) final energy consumption is calibrated in the Base-Year templates module. Separate BY templates are available for each region for all end-use sectors, upstream, and the electricity generation sector. A representation of all existing technologies and resources are included in the Base-Year templates to determine the state of teh energy system in the intial period. Technologies available for the future years are modelled in a separate module called 'New Technologies'. Any region can access the technology module if it is cost effective to do so. Resource data such as cost, cumulative and annual availability of different resources are modelled in the 'Resource Module'. The world regions are linked through the trade of energy goods and CO2 via the trade module. There are separate modules available for hydrogen production, carbon sequestration, land-use CO2 emissions, N2O measures, CH4 measures, etc. Climate module calculates impacts of GHG emissions in the Atmosphere (CO2 concentration and temperature changes). Beside these modules, there are several scenario files which are used to apply different policies and constraints.

Further details on the TIAM model structure is available in Loulou and Labriet (2007).

The underlying data for the base year calibration in TIAM-UCL is the IEA Extended Energy Balances of OECD and non-OECD countries.

TIAM is a whole energy system model covering from energy resources to conversion to infrastructure to end-use sectors.This is a linear programming model that minimises total discounted energy system cost in the standard version and maximises societal welfare (total surplus) in the elastic demand version to compute a partial equilibrium. Linear programming is formulated in the GAMS (General Algebraic Modelling System) language and solved via powerful linear programming optimisers (CPLEX, XPRESS or others).

VEDA Front-End (VEDA_FE) is one of the two interfaces available for the TIMES model. It is used to formulate the TIAM-UCL model database that lay down the basic structure of the model and hold fundamental data and assumptions for processes (technologies) and commodities. VEDA is a set of tools geared to facilitate the creation, maintenance, browsing, and modification of the large data bases required by complex mathematical and economic models. Data and assumptions are fed into VEDA_FE that provides input to the TIMES code. VEDA_FE accepts input from a variety of Excel files with different (flexible) structures that are tailored to work efficiently with data intensive models. The model is sent from VEDA_FE to GAMS where it is run. The results are then loaded into another interface, VEDA Back-End (VEDA_BE), where they can be manipulated and interpreted as necessary.

A critical challenge when working with global energy-environment-economy (E3) models is appropriately exploring the large uncertainties inherent in the modelling procedure. Without careful elucidation, analysts and policy makers alike can be misled by the precision of the model output and lured into a false sense of security at the certainty of the implied energy system transition(s). Broadly speaking, uncertainty in E3 models can be separated into input parameter uncertainty and structural uncertainty. Our focus here is on the latter, which stems from the model not fully capturing the complexity of the system it is trying to represent because, for example, it has necessarily simplified equations, a finite resolution, etc. Over the course of the ADVANCE project we have developed a technique to investigate a key element of structural uncertainty within TIAM-UCL. We have used the approach of modelling to generate alternatives to relax the cost optimality assumption that underpins the model and reformulated its objective function to explore this near optimal solution space. Our technique seeks to identify energy system transition pathways that are as diverse as possible within this near least cost space and as such assess the impact of minor, realistic deviations from cost optimal decision making.