Radiative Forcing from Other Gases

The radiative forcing from other gases are taken as exogenous assumptions.

The carbon cycle is a three-box model, after Nordhaus and Boyer (2010)1. The model is a linear three-reservoir model (atmosphere, biosphere + ocean mixed layer, and deep ocean). Each reservoir is assumed to be homogenous (well-mixed in the short run) and is characterized by a residence time inside the box and corresponding mixing rates with the two other reservoirs (for longer timescales). Carbon flows between reservoirs depend on constant transfer coefficients. GHGs emissions (CO2 solely) accumulate in the atmosphere and are slowly removed by biospheric and oceanic sinks.

The stocks of carbon (in the form of CO2) in the atmosphere, in the biomass and upper ocean, and in the deep ocean are, respectively, A, B, and O. The variable E is the CO2 emissions. The evolution of A, B, and O is given by 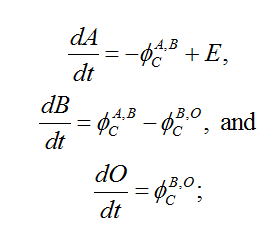 The fluxes are equal to

The initial values of A, B, and O, and the parameters a12, a21, a23, and a32 determine the fluxes between reservoirs. The main criticism which may be addressed to this Carbon-cycle model is that the transfer coefficients are constant. In particular, they do not depend on the carbon content of the reservoir (e.g. deforestation hindering biospheric sinks) nor are they influenced by ongoing climatic change (e.g. positive feedbacks between climate change and the carbon cycle).

The temperature model is a two-box model, after Schneider and Thompson (1981)2 and Ambrosi et al. (2003)3, with the atmosphere temperature TA and the ocean temperature TO as follows: 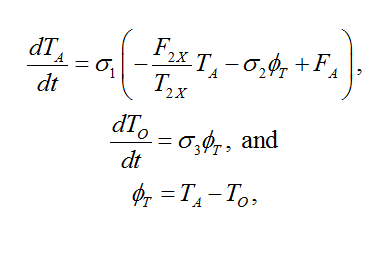 where T2x is the equilibrium temperature increase at the doubling of the CO2 concentration, that is, it represents climate sensitivity. All parameters have been calibrated to reproduce results from CMIP5 from CNRM-CERFACS global climate model, CNRM-CM5, over the 21st century for RCP3-PD and RCP4.5 radiative forcing trajectories (using a least squares method). This calibration leads to the following parameter values for heat transfer rates (for a yearly time step): σ1= 0.054C.W-1-1.m2, σ2= 0.664 C.W-1-1.m2 and σ3= 0.0308, and a climate sensitivity of 2.6°C.