Three billion people globally depend on solid fuels for cooking and heating. According to Cameron et al (2016)1, "household air pollution from the incomplete combustion of these fuels globally leads to 4.3 million premature deaths each year, with 1.7 million of those in South Asia". The Indian government is subsidizing petroleum-based fuels (such as kerosene and liquefied petroleum gas - LPG) to increase their uptake, however, still more than 72% of Indians mostly rely on solid fuels. Further, it is expected that more stringent climate policies will increase the cost of fuels making a switch to cleaner cooking more challenging.

For studying energy access issues, a household fuel-choice model, Access, is used in combination with MESSAGE. At the moment the MESSAGE Access runs have been developed for South Asia, which has the largest amount of solid-fuel users in the world. These two models are run iteratively until convergence: the Access model takes fuel prices from MESSAGE, selects optimal fuel choices for all household groups, and returns aggregate residential demand for the five cooking fuels (LPG, piped gas, electricity, kerosene, and biomass). MESSAGE, in turn, determines the least-cost energy supply pathway to meet these demands and returns new prices. Climate policy is implemented from 2020 through 2100, with the implied carbon equivalent value rising at a discount rate of 5% per year over the time period.

The Access model reads in prices for five fuels from MESSAGE over the period from 2005 to 2100 and determines demand for each fuel in multiple heterogeneous population sub-groups. In this study, Access is implemented only for the MESSAGE South Asia region and represents only demand for cooking fuels. The Access model requires data inputs in three categories: 1) household characteristics and fuel preferences for each population sub-group calculated from nationally representative household surveys, 2) regional projections of population, GDP, urbanization, and electrification source and 3) cooking technology attribute data. When used in conjunction with MESSAGE, the two models iterate to account for the impact of changing household energy demands on fuel prices. MESSAGE-Access iterates until the output of the Access model from a given run is within 2% of its output from the previous run. This process is visualized in Figure 1. (Cameron et al, 2016 1) 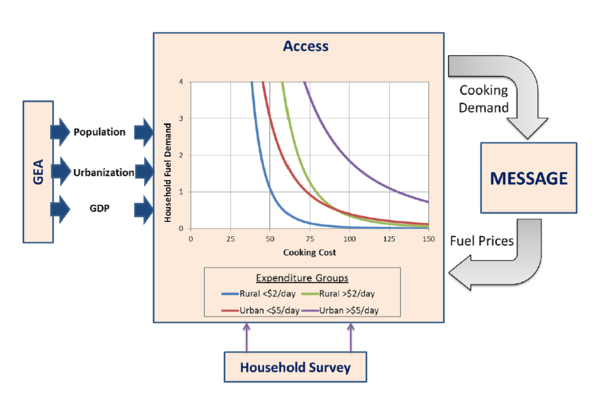 When current trends are projected to the future, the GHG emissions of India are expected to rise sharply by 2050. At the same time, urbanization and high expected GDP growth would also enable 1 billion people (63% of the population) to transition to clean cooking fuels over the period from 2010 to 2050 (see Figure 2). However, climate mitigation scenarios, even though reducing total emissions, could have a negative effect on the transition to clean cooking fuels, due to increased prices of LPG. Figure 2 shows the effect of mitigation through the implementation carbon price if different stringency (US$10 (C10), US$20 (C20), US$30 (C30), and US$40 (C40) per ton CO2 equivalent in the year 2020) on GHG emissions versus solid-fuel reliance. (Cameron et al, 2016 1)

The aforementioned negative impacts on energy access of mitigation policies can be counteracted by government policies. As is stated in Cameron et al (2016)1, "Policies that reduce stove costs shift more households to clean fuels per dollar invested than policies to reduce fuel costs. This is because, although stoves represent only a small share of the actual (levelized) cost of cooking with clean fuels, the high upfront costs of clean stoves represent a larger barrier to clean cooking uptake than fuel prices for many poor households." Therefore, as Figure 3 shows, the most cost-effective measures are stove subsidies, and with different levels of support, different results in clean fuel uptake can be observed. For universal access, fuel price support would have to increase to 55 and 65%, respectively, with and without climate policy (at C30). (Cameron et al, 2016 1) 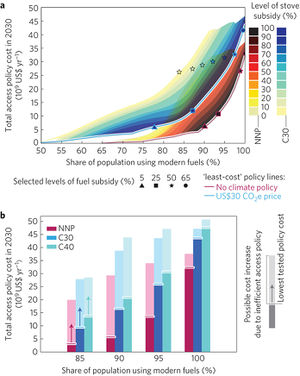 Figure 3: a, Fuel and stove price support combinations for the no climate policy (NNP) and US CO2e price (C30) scenario in 2030. Colours represent climate policy and stove price support level. Triangles, squares, stars and circles represent 5%, 25%, 50% and 65% fuel price support levels, respectively. An additional representation of fuel price support level can be viewed in Supplementary Fig. 11. ‘Least-cost’ policy lines are highlighted at the lower end of each of the areas by the cyan and magenta lines. b, Total access policy costs in 2030 for the achievement of an 85, 90, 95 and 100% share of population having access to modern fuels, respectively. Dark shaded bars show the lowest policy costs for the respective level of modern fuel access (corresponding to the level indicated by the ‘least-cost’ policy lines in a). Lighter shaded areas show the possible cost increase due to an inefficient access policy (illustrated by the arrows). Results are shown for the NNP, C30 and C40 scenarios. Figure from Cameron et al. (2016).

The impacts of climate and energy access policies will depend on the household income group. The urban poor and higher expenditure rural households (U1 and R2) are likely to be the most affected by climate policy, but they are also likely to benefit the most of access policies. See Figure 4 for more information. (Cameron et al, 2016 1) 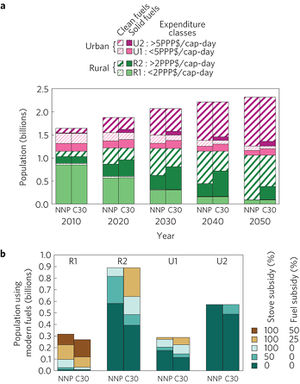 Figure 4: a, Solid and clean cooking in four population groups over time for the NNP and C30 scenarios in the absence of dedicated energy access policies such as fuel price or stove cost support. Population groups are divided according to rural and urban dwelling location and daily per-capita expenditure (under and over PPP per person per day for rural groups and PPP per person per day for urban groups). PPP, purchasing power parity. b, Impacts of selected stove cost and fuel price support polices on four expenditure groups in 2030 in the NNP and C30 scenarios. Figure from Cameron et al. (2016).