The demand of products by the consumers, the producers (for intermediate consumption and investment) and the public sector constitutes the total domestic demand. This total demand is allocated between domestic products and imported products, following the Armington specification. In this specification, branches and sectors use a composite commodity which combines domestically produced and imported goods, which are considered as imperfect substitutes (Armington assumption).

Household demand is determined by the decision to allocate income between current and future consumption (this decision derives from the utility maximization subject to an inter-temporal budget constraint which states that all available disposable income will be spend at the present or at some time in the future) and by the allocation of current expenditure among different consumption categories. Consumption categories include non-durable consumption categories (food, culture etc.) and services from durable goods (cars, heating systems and electric appliances). Based on myopic assumptions about the future, the household decides the amount of leisure that wishes to forsake in order to acquire the desired amount of income (thus also defining labour supply behaviour).

At the second stage, total household consumption is disaggregated into demand for specific consumption goods. For this the integrated model of consumer demand for non-durables and durables, developed by Conrad and Schröder (1991) is implemented. Households obtain utility from consuming a non-durable good or service and from using a durable good. The consumer decide on the desired stock of the durable based not on its relative purchase cost and on the cost of goods linked with that durable.

With regards to the firms, in GEM-E3 production technologies are formulated in an endogenous manner allowing for price-driven demand for intermediate goods. Factor demand is derived from Shephard’s lemma. In this process it is assumed that the stocks of capital and labour are proportional to the optimal flows in volume. At each level of the nesting scheme of the production function, demand for a factor at a lower level of the nesting scheme is linked to bundle to which it belongs, with different substitution elasticities at each level. This gives finally a cost-minimising demand for each production factor.

GEM-E3 model combines micro and macro analysis. At micro level the model contains a detailed representation of economic agents’ (firms, households, public sector) behavior. The model formulates the supply and demand behaviour of the economic agents regarding production, consumption, investment, employment and allocation of their financial assets. The demand of products by the consumers, the producers (for intermediate consumption and investment) and the public sector constitutes the total domestic demand. This total demand is allocated between domestic products and imported products, following the Armington specification. In this specification, branches and sectors use a composite commodity which combines domestically produced and imported goods, which are considered as imperfect substitutes (Armington assumption). Each country buys and imports at the prices set by the supplying countries following their export supply behaviour. The buyer of the composite good (domestic) seeks to minimise his total cost and decides the mix of imported and domestic products so that the marginal rate of substitution equals the ratio of domestic to imported product prices.

In the GEM-E3 model prices are the result of market equilibrium (demand and supply effects). On derived prices appropriate taxation is applied, to form prices as perceived by consumers. The main leading price is that of the composite good. Depending on the destination of a commodity, differentiated taxation may be applied, as for example indirect taxation or VAT.

Households in the GEM-E3 SAM are identified as a single social group (a single representative household is modeled). Households maximize their inter-temporal utility under an inter-temporal budget constraint. The demand functions are derived by solving the maximization problem, under general assumptions regarding expectations and steady state conditions. These demand functions allocate the expected income of the household, depending on the formulation of the problem, between consumption goods and future consumption (savings). This is the default formulation of households’ behaviour. Alternatively household behavior is modeled so that the consumer allocates its expected income between present, future consumption and leisure. Households receive income from their ownership of production factors, from other institutions and transfers from the rest of the world. Household expenditure is allocated between consumption, tax payment and savings.

The representative household firstly decides on the allocation of its income between present and future consumption of goods. At a 2nd stage the household allocates its total consumption expenditure between the different consumption categories available. The consumption categories are split in non-durable consumption categories (food, culture etc.) and services from durable goods (cars, heating systems and electric appliances). For this allocation an integrated model of consumer demand for non-durables and durables, developed by Conrad and Schröder (1991) is implemented. The rationale behind the distinction between durables and non-durables is that the households obtain utility from consuming a non-durable good or service and from using a durable good. So for the latter the consumer has to decide on the desired stock of the durable based not only on the relative purchase cost of the durable, but also on the cost of those goods that are needed in connection with the durable (as for example fuels for cars or for heating systems). The general form that is described above is being depicted with a nesting scheme as it is appeared below.

Figure 4: The consumption structure of the GEM-E3 model 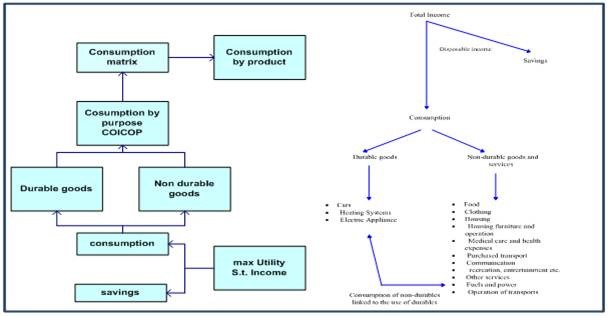 In the GEM-E3 model firms are modeled to maximize their profits, constrained by the physical capital stock (fixed within the current period) and the available technology. Producers can change their physical capital stock over time through investment. Capital stock data by sector of production are not available either from GTAP or from EUROSTAT databases (it is computed in the calibration phase of the model).

Each producer (represented by an activity) is assumed to maximize profits, defined as the difference between the revenue earned and the cost of factors and intermediate inputs. Profits are maximized subject to its production technology. Domestic production is defined by branch. It is assumed that each branch produces a single good which is differentiated from any other good in the economy.

Production functions in GEM-E3 exhibit a nested separability scheme, involving capital, skilled and unskilled labour, energy and materials and are based on a CES neo-classical type of production function. The exact nesting scheme of production in GEM-E3 has been selected to match available econometric data on KLEM substitution elasticities and the specific features of each activity. The optimal production behaviour can be represented in the primal or the dual formulation. Their equivalence, under certain assumptions, can be verified by the theory of production behaviour.

In the model the dual formulation is used and the long run unit cost function is of the nested CES type with factor-augmenting technical change, i.e. price diminishing technical change. The firm (at branch level) decides its supply of goods or services given its selling price and the prices of production factors.

The production technology exhibits constant return of scale. The firm supplies its good and selects a production technology so as to maximize its profit within the current year, given the fact that the firm cannot change the stock of productive capital within this period of time. The firm can change its stock of capital the following year, by investing in the current one. Since the stock of capital is fixed within the current year, the supply curve of domestic goods is upwards sloping and exhibits decreasing return to scale. 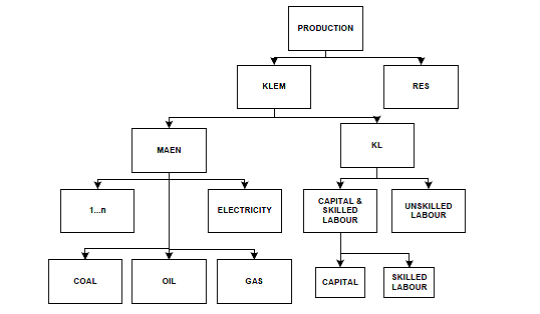 Power supply sectors: At the 1st nesting level of the power supply sector, production is split into two aggregates, one consisting of a bundle of power producing technologies (TECH) and the other of the transmission and distribution part (DIST). At the 2nd level, all power producing technologies identified in the model are in the same nest whereas the (DIST) bundle is disaggregated to capital, skilled and unskilled labour and materials.

Refineries: the nesting structure is similar to the non-energy sectors with a change in the top level of the nest where the two aggregates are now (KLEM) and fuels (FUEL).

Firms address their products to three market segments namely to the domestic market, to the other EU countries and to the rest of the world. Prices are derived through demand/supply interactions. In any iteration of the model run and before global equilibrium is achieved, producers face demand for their products. To this demand they respond with a price. For the PC sectors, since these operate under constant returns to scale and the number of firms is very large, this price depends only on their marginal cost of production.

The producer is assumed not to differentiate his price according to the market to which he sells his products. He therefore sells his products at the same price (equal to his marginal cost reduced by the amount of production subsidies that he receives).

The Governments’ behaviour is exogenous in GEM-E3. Government’s final demand by product is obtained by applying fixed coefficients to the exogenous volume of government consumption.