A start point for IMACLIM is the recognition that it is almost impossible to find mathematical functions that can handle large departures from a reference equilibrium over a time period of one century and are flexible enough to encompass different scenarios of structural change resulting from the interplay between consumption styles, technologies and localization patterns (Hourcade, 1993)1.

Beyond the classical production function, or reconciling bottom-up and top-down approaches

This modelling approach allows for abandoning standard aggregate production functions, which have intrinsic limitations in cases of large departures from the reference equilibrium (Frondel et al., 2002)2 and sea changes of production frontiers over several decades.

As we move away from using a traditional production function, it becomes possible to highlight the influence of factors other than price on decisions affecting the allocation of resources. The use of this modeling approach requires however a comprehensive description of the temporally evolving technical characteristics of each sector.

At each point in time, producers are assumed to operate under constraint of a fixed production capacity Capk,i, defined as the maximum level of physical output achievable with their installed equipment.

However, the model allows short-run adjustments to market conditions through the modification of the utilization rate Qk,i/Capk,i. This represents a different approach from standard production specifications, since in Imaclim the 'capital' factor is not always fully utilized. Supply cost curves in Imaclim-R thus show static decreasing returns: production costs increase when the utilization rate of equipment approaches 1 (100 %) (See Figure 1). In principle, these decreasing returns affect all intermediary inputs and labor. However, for the sake of simplicity and because of the order of magnitude of the correlation between utilization rates and prices (Corrado and Mattey, 1997)3, we assume that the primary cause of higher production costs is higher labor costs due to overtime operations with lower productivity, costly night work and increased maintenance works. We thus set (i) fixed input-output coefficients representing that, with the current set of embodied techniques, producing one unit of good i in region k requires the fixed physical amount ICj,i,k of intermediate goods j and lk,iof labor; (ii) a decreasing return parameter Ωk,i= Ω(Qk,i/Capk,i) on wages only, at the sector level. The treatment of the cost of crude oil production is an exception. The increasing factor weighs on the mark-up rate, to convey the fact that oligopolistic producers can take advantage of capacity shortages by increasing their differential rent.

This solution actually comes back to earlier works on the existence of short-run flexibility of production systems at the sectoral level with putty-clay technologies (Marshall, 1890)4, (Johansen, 1959)5 demonstrating that this flexibility comes less from input substitution than from variations in differentiated capacity utilization rates. 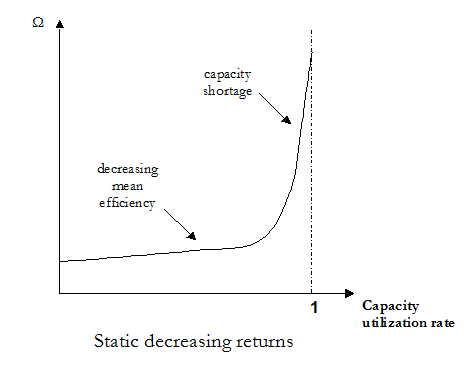 We derive an expression of mean production costs Cmk,i, that depends on the prices of intermediate goods pICj,i,k, input-ouput coefficients ICj,i,k and lk,i, wages wk,i, and production levels through the decreasing return factor Ωk,i applied to labor costs (including payroll taxes).

Producer prices are equal to the sum of mean production costs and mean profits. In the current version of the model, all sectors apply a constant sector-specific mark-up rate pk,i so that the producer price is given by equation (2). This constant mark-up corresponds to a standard profit-maximization for producers whose mean production costs follow equation (1) and who are price-takers, provided that the decreasing return factor can be approximated by an exponential function of utilization rate.

This equation is an inverse supply curve: it shows how a representative producer decides their level of output Qk,i (which is included in the Ωk,ifactor) as a function of all prices and real wages.

From equation (2) we derive wages and profits in each sector:

The cost function shows fixed technical coefficients and therefore does not allow for substitution between production factors when relative prices change within the new static equilibrium. Only the level of output Qk,i can be adjusted according to these price changes.