The industrial sector is characterized by 6 demand segments, each representing either the physical output of the industry or the total energy requirement (Table 3.5.1). There are also one demand for 'Other non-specified energy consumption (ONO)', one for 'Industrial and Other non-energy uses (NEO)' and one for 'Other Industrial consumption (I0I)', which are considered as a generic demands. The last one (I0I) has been added for minor calibration purposes and is generally not used. There are different technologies and fuels modelled for supplying steam, process heat, machine drives and electro-chemical process for each energy-service demand in the Base-year templates.

Energy service demands are projected to 2100 using general economic and demographic drivers population, GDP, GDP per capita and sectoral output). To develop projections of future energy service demands, estimates of drivers are used in conjunction with user assumptions on the topic of service demand sensitivity to these drivers. Projected industry sector energy-service demands at a global level are presented in Figure 3.5.1. Similar tables have been generated for each region. Industry sector has relatively high growth in China as compared to other regions. 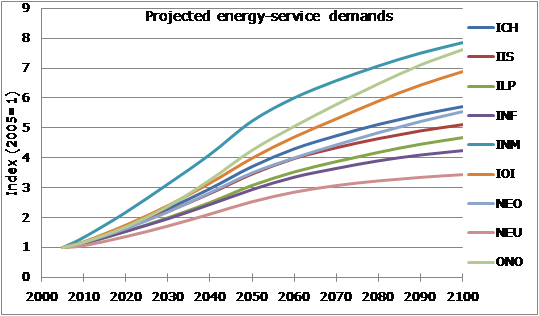