A general equilibrium with rigidities 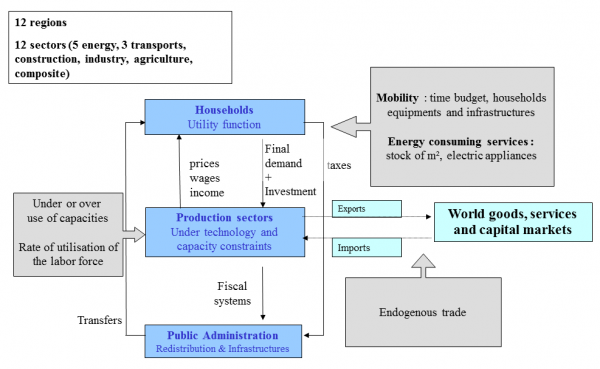 Each year, households maximize their current utility under constraints of both revenue received and of their time spent in transport. They save an exogenous share of their revenues. For detailed descriptions of demand formation mechanisms refer to the section on demand representation.

Tax rates (and/or subsidies) are calibrated to their values for the model calibration year (2001). Taxes (and/or subsidies) impact upon energy, labor, revenues, added value, production, imports and exports. In the default setting of the model, tax rates are kept constant throughout the modelling period (except for in scenarios that model the introduction of a carbon tax ) although alternative assumption on tax rates can also be tested. In a scenario where a carbon tax is introduced, alternative assumptions on the use of the corresponding revenues can be modelled i.e. they are given to households via transfers, used to reduce other pre-existing tax rates or used to finance a subsidy.

Transfers are determined such that the public administration budget is at equilibrium each year. Public debt is not accounted for.

Markets of goods and services

In the Imaclim-R model, all intermediate and final goods are internationally tradable and total demand for each good (the sum of households' consumption, public and private investments and intermediate uses) is satisfied by a mix of domestic production and imports (see Section on International Trade ). Domestic as well as international markets for all goods are cleared (i.e. no stock is allowed) by a unique set of relative prices calculated in the static equilibrium such that demand and supply are equal.

In each region k and sector i, the price equation is:

where πk,i is a markup, ICj,i,k are intermediate consumption of good j in sector i in region k, and Ωk,i is an increasing cost (or decreasing returns) function of the productive capacities utilization rate. This function is applied to labor costs (which include wages wk,i and labor taxes taxk,i).

The functional form for Ω is:

Regional prices thus correspond to the addition of average regional production costs and a margin. This markup, which is fixed in the static equilibrium, encapsulates Ricardian and scarcity rents at the same time and increases with the utilization rate of production capacities in the oil sector.

A further parameter for the oil sector is that Middle-Eastern producers are considered 'swing producers' who are free to strategically set their investment decisions and, until they reach their depletion constraints, to control oil prices through the utilization rate of their production capacities (Kaufmann et al, 2004)1. This possibility is justified by the temporary reinforcement of their market power due to the stagnation and decline of conventional oil in the rest of the world. They can in particular decide to slow the development of production capacities below its maximum rate in order to adjust the oil price according to their rent-seeking objectives. They anticipate the level of capacities that will make it possible for them to reach their goals, on the basis of projections of total oil demand and production in other regions.