REMIND-MAgPIE models resource potentials for non-biomass renewables (hydro, solar, wind, and geothermal) using region-specific potentials. For each renewable energy type, we classify the potentials into different grades, specified by capacity factors (Figure 1). Superior grades have higher capacity factors, which correspond to more full-load hours per year. This implies higher energy production for a given installed capacity. Therefore, the grade structure leads to a gradual expansion of renewable energy deployment over time as a result of optimization.

REMIND-MAgPIE’s renewable energy potentials often appear higher than the potentials used in other models [1]. However, these models typically limit potentials to specific locations that are currently competitive or close to becoming competitive. REMIND-MAgPIE’s grade structure allows for the inclusion of sites that are less attractive, but may become competitive in the long-term as the costs of other power-generation technologies increase. This choice is dependent on the model. The regionally aggregated potentials for solar PV and CSP used in REMIND-MAgPIE were developed in Pietzcker [2] in cooperation with the German Aerospace Center DLR. In total, the solar potential is almost unlimited, with a total amount of 6500 EJ/year for PV and 2000EJ/year for CSP. However, the resource quality differs strongly across regions, so that some regions have mostly sites with low full-load hours. To account for the competition between PV and CSP for the same sites with good irradiation, an additional constraint for the combined deployment of PV and CSP was introduced in REMIND-MAgPIE [3]. This implies that the sum of the area used by both technologies is smaller than the total available area.

The regionally aggregated wind potentials were developed based on a number of studies [4]; [5]; [6]; [7]. The technical potentials for combined on- and off-shore wind power amount to 370EJ/year (half of this amount is at sites with less than 1400 full-load hours). The total value is twice as large as the potential estimated by WGBU [8], but is less than one fifth of the potential in Lu [9]. 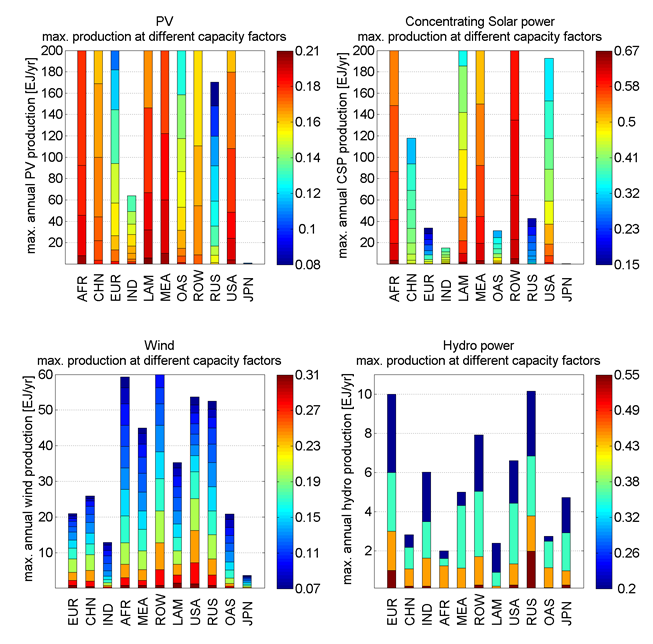 The global potentials of hydropower amount to 50 EJ/year. These estimates are based on the technological potentials provided in WGBU (2003). The regional disaggregation is based on information from a background paper produced for this report (Horlacher 2003).