The primary drivers of future energy demand in DNE21+ are projections of population and GDP at market exchange rate (MER). We developed two different prospects as they may more or less likely take place in the future as macroeconomic trends, considering from the past statistics. In Scenario A, slow economic growth slows down after the miraculous past growth mainly in developed countries In Scenario B, technological advances keep ongoing as in the past and per capita GDP continues to grow quite rapidly. As a reference case, we usually refer to Scenario A, but it depends on scope and purpose of analysis.

The world population scenarios were developed with reference to The UN Population Division; World Population Prospects (The 2008 Revision) which have been used worldwide. UN scenarios of the world population are developed every two years and have been revised downward for every update. Therefore, in this scenario, even after taking account of the future population increase in developing countries such as in Asia or Africa, we assume it very unlikely that the future world population will be substantially over 10 billion. Historical statistics explicitly show the trends that the fertility and population growth rates become lower with growing GDP per capita. Our population scenario is developed, assuming this trend to keep in the future, by replacing the relationship between fertility and per capita GDP by the relationship between annual change rate of population and per capita GDP. The population growth in Scenario B is assumed to be smaller than that in Scenario A, as per capita GDP is larger in Scenario B. 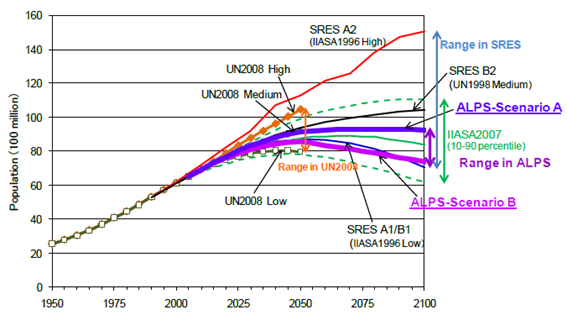 In terms of GDP per capita, the following distinct trends are observed historically. 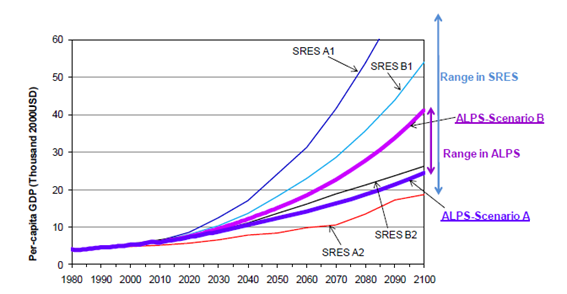 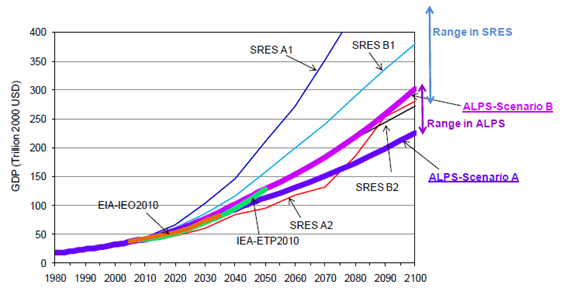