PROMETHEUS quantifies CO2 emissions and incorporates environmentally oriented emission abatement technologies (like RES, electric vehicles, CCS, energy efficiency) and policy instruments. The latter include both market based instruments such as cap and trade systems with differential application per region and sector specific policies and measures focusing on specific carbon emitting activities. Key characteristics of the model, that are particularly pertinent for performing the analysis of the implications of alternative climate abatement scenarios, include world supply/demand resolution for determining the prices of internationally traded fuels and technology dynamics mechanisms for simulating spill-over effects for technological improvements (increased uptake of a new technology in one part of the world leads to improvements through learning by experience which eventually benefits the energy systems in other parts of the World).

PROMETHEUS is designed to provide medium and long term energy system projections and system restructuring up to 2050, both in the demand and the supply sides. The model produces analytical quantitative results in the form of detailed energy balances in the period 2015 to 2050 annually. The model can support impact assessment of specific energy and environment policies and measures, applied at regional and global level, including price signals, such as taxation, subsidies, technology and energy efficiency promoting policies, RES supporting policies, environmental policies and technology standards.

PROMETHEUS is a self-contained large-scale world energy demand and supply model consisting of a large set of equations describing the time evolution of key variables, which are of interest in the context of a general analysis of the energy-environment-economic system. The model can be used either in its deterministic or in its stochastic mode. Equations in PROMETHEUS represent the model’s endogenous variables as a function of other endogenous variables, exogenous variables, parameters and residual terms. PROMETHEUS incorporates a recursive dynamic (partial equilibrium energy system) model with annual resolution currently serviced to run up to the year 2050 (the process to extend model horizon to 2100 is ongoing). The PROMETHEUS model has a triangular structure in order to avoid contemporaneous simultaneity. On the other hand, simultaneity is modelled through lagged instances of endogenous variables. Most of the model equations are specified in difference terms in order to avoid excessive early variability and adequately represent accumulation of uncertainty in the longer term.

The model simulates both demand and supply of energy, interacting with each other to form market equilibrium at different regional scales: detailed regional balances are aggregated in order to simulate world energy markets. Apart from international fuel prices, regional energy systems influence each other particularly through trade, technical progress and network effects including changing patterns of consumption and spillover effects with regard to technology diffusion.

PROMETHEUS model is organized in sub-models (modules), each one representing the behaviour of a representative agent, a demander and/or a supplier of energy. The figure below presents a simplified summary flow chart of the PROMETHEUS model. The main modules are:

1) The demographic and economic activity module, which projects population and activity growth for each region.

2) The fossil fuel supply module that includes oil and gas resources, while coal is assumed to have abundant supplies relative to production prospects at least for the projection time horizon

3) The biomass supply module, which contains technical and economic potential for biomass per region and their effects on biomass costs.

5) The fuel prices module projecting both international and final consumer prices, with the latter being differentiated for each demand sector. Global fossil fuel prices are determined from the equilibrium of demand and supply of each fuel at the global level.

7) The electricity generation module, identifying 26 power generation technologies and their competition to cover electricity demand for base, medium and peak load.

9)The hydrogen storage and delivery module, including 16 different technological options in order to represent in detail the development of hydrogen infrastructure.

10) The technology dynamics module, which endogenises technical progress through both learning by research and learning by experience (“learning by doing”) mechanisms. 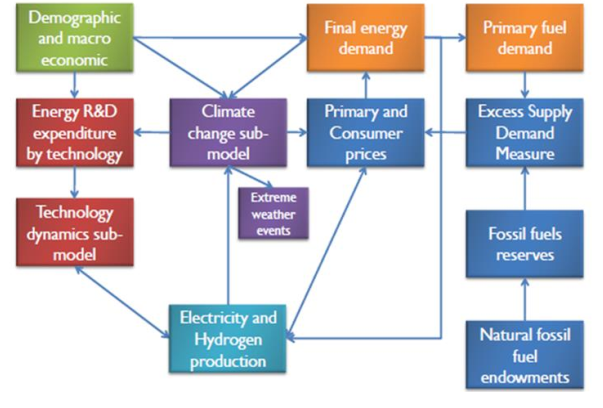