The transport sector is one of the most important energy related GHG emitters, while the emission reduction options in this sector are rather limited, especially in specific models like aviation and freight transport. A detailed representation of the transport sector allowing projection of activity, final energy consumption, technology deployment and carbon dioxide emissions to the future and policy and impact analysis is thus very important. The PROMETHEUS transport module projects to the future (up to 2050 and 2100) the road transport sector for each region identified in the model. The module projects the evolution of passenger car stocks and demand for transport, based on economic and technology choices of transportation; PROMETHEUS also projects the derived fuel consumption (diesel, gasoline, natural gas, biofuels, electricity and hydrogen) and CO2 emissions from fuel combustion.

The PROMETHEUS model is equipped with a detailed bottom-up mechanism to project the evolution of passenger car stock in each region, which depends on exogenous socio-economic projections (population and GDP growth) and on the average cost of passenger transportation (depending on the evolution of prices for trannsport fuels). The formulation used in PROMETHEUS can also capture changes in consumption patterns (when a developing region reaches income levels typical for a developed one) and the possible saturation effects in developed regions (in case that passenger vehicles per inhabitant reach a certain high threshold).

The private passenger cars sector is modelled in great detail in PROMETHEUS model, by distinguishing thirteen types of passenger cars (figure below):

The road transport module projects transport activity, in terms of car ownership per capita, car utilisation rates, and the penetration of new car types in the market. The model first determines the total car stock that is necessary to satisfy the increased transport activity, by using equations depending on GDP growth and average fuel price for road transport. PROMETHEUS then calculates the new registrations required to meet the increased demand by taking into account the scrapping of the cars reaching the end of their lifetime.

Short term, long term and very long term effects on road transport activity are thoroughly modelled, in order to project transport activity in a realistic manner. Very long term equations are estimated using a pool of developed countries that have already reached or they are approaching saturation levels. Transitions from one specification to another are modelled using weights.

Market penetration of road passenger transport technologies is not predefined but is a result of the model depending on economics of alternative car options and behaviour of private consumers. The share of each car type in new registrations is determined by its total cost per km (that includes capital, fixed O&M, variable O&M and fuel costs) and maturity factors through a Weibull specification (already described in the “Energy demand section). Fuel consumption (gasoline, diesel, bio-fuels, electricity or hydrogen) is then calculated using efficiencies, which are determined endogenously by the two factor learning curves module, and average mileages (endogenously derived based on vehicle utilisation rates). Infrastructure and social network effects are modelled and play a crucial role, especially for the penetration of new low-carbon technologies, like electric and fuel cell cars. Improvements in energy efficiency also impact final energy consumption in the road transport sector. Reduction in energy intensity of road transport activity can be a result of increases in fuel prices, technological choices (e.g. hybrid vehicles substituting for gasoline internal combustion cars), reduction in the utilisation rates of vehicles as motorisation increases, changes in consumption patterns, technological improvements and imposition of energy efficiency (or CO2) standards.

Marine bunkers are treated separately at the world level, due to the fact that CO2 emissions from international marine and aviation bunkers are not included in climate policy targets of specific regions/countries, as described in national climate poliies and in Nationally Determined Contributions (NDCs). Oil products dominate in final energy demand for marine bunkers, but the model also includes biofuels and clean synthetic fuels as an alternative to petroleum products. 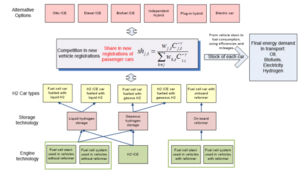 Note: The documentation of PROMETHEUS is 'under review' and is not yet 'published'!
Retrieved from "https://www.iamcdocumentation.eu/index.php?title=Transport_-_PROMETHEUS&oldid=14496"
Category: