Natural gas domestic production and imports directly supply gas for consumption, either for use in power plants or in final energy consumption (industries, buildings, transport).

PROMETHEUS includes a detailed module to represent hydrogen production, transport, storage and use in various sectors: transport (fuel cells or thermal use), but also in stationary uses in industry and buildings (fuel cells or blending with natural gas). PROMETHEUS includes various hydrogen (H2) production options, which compete for the centralised production of hydrogen. Investments in hydrogen-supply technologies are based on the production cost of each technology. In each year, the model determines the required new investments, by taking into account both normal and pre-mature scrapping rates of technologies, and then calculates their shares in new investments (using a quasi cost-minimising Weibull function similar to the one used in the power generation module) . These H2 production technologies include the currently most promising options towards decarbonisation: water electrolysis, gas steam reforming (with or without CCS), but also other innovative solutions including biomass gasification (with or without CCS), nuclear or solar high-temperature thermochemical cycles. On the demand side, hydrogen is introduced in the competitive market of distributed electricity production (through stationary fuel cells) and in the road transport sector. The hydrogen and electricity systems are connected and interact within the overall energy system in two points: in the hydrogen production through the electricity price in grid electrolysis and in the demand side through the competition between the decentralized fuel cell electricity production and the electricity from grid and the competition between electric and fuel cell private cars. The major end uses of hydrogen in PROMETHEUS are for vehicle propulsion and for production of steam or heat and electricity. Two kinds of vehicle propulsion engines that use hydrogen are included in PROMETHEUS: fuel cells and internal combustion engines. The fuel cell engine is further differentiated into stack and system components. Moreover, the stacks and systems themselves are varying depending on the fuel used in the fuel cell cars (hydrogen or gasoline). On the other hand, the internal combustion engines technically are not different from the internal combustion engines that are used today in oil-powered vehicles.

For automotive on-board hydrogen storage, two options are included in the model: hydrogen in liquid form and hydrogen in gaseous form. These two options compete in the model, since each of them needs its own specific infrastructure to support it. On-board gasoline reformers are also included in PROMETHEUS, in order to allow for on-board hydrogen production. These reformers are used in the fuel cell vehicles, bypassing in this way the need for hydrogen distribution infrastructure. In total, the hydrogen related technologies incorporated in PROMETHEUS for mobile applications are two types of fuel cell stacks, two types of fuel cell systems, two types of on board hydrogen storage, one type of on-board reformer and a hydrogen IC engine. The above components result in eight different hydrogen related technologies in road transport. These components are combined together to define five vehicle types in the model:

The hydrogen powered cars compete with the rest of the car types included in the model (conventional, hybrid, plug-in hybrid and electric cars) in order to gain share in the market. The decision is based on the total cost per vehicle kilometre of each car type, which includes the costs to purchase car, the operation and maintenance cost and the cost to purchase fuels.

In total, six hydrogen related technologies are considered for stationary applications in the residential/commercial and industrial sectors:

The stylized configuration of PROMETHEUS refers to an “average” region supplied with hydrogen during a “take-off” period for hydrogen and contains a plant connected to a turnpike pipeline, which is used as storage medium, load management tool and emergency supply in cases of production disruption. The turnpike pipeline crosses the region and is connected with similar turnpike pipelines in neighbouring regions. Moreover, other pipelines of smaller capacity connect the plant with the urban and industrial areas (high-demand areas) of the region. The model identifies two kinds of service stations: rural stations along the roads crossing the region and urban service stations mostly concentrated on the outside ring of the urban area. It can be reasonably assumed that all rural stations will be supplied by trucks carrying gaseous or liquid hydrogen. On site hydrogen production and distribution facilities can be built where demand is high enough (i.e. near urban cities). Hydrogen can be stored either in gaseous or in liquid form. PROMETHEUS also incorporates competition between gaseous or liquid storage options and between pipelines and trucks. The detailed hydrogen infrastructure system of PROMETHEUS is described in figure below 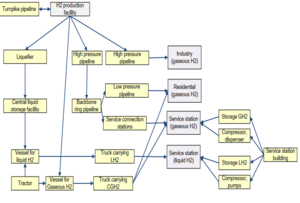 Note: The documentation of PROMETHEUS is 'under review' and is not yet 'published'!
Retrieved from "https://www.iamcdocumentation.eu/index.php?title=Gaseous_fuels_-_PROMETHEUS&oldid=14517"
Category: